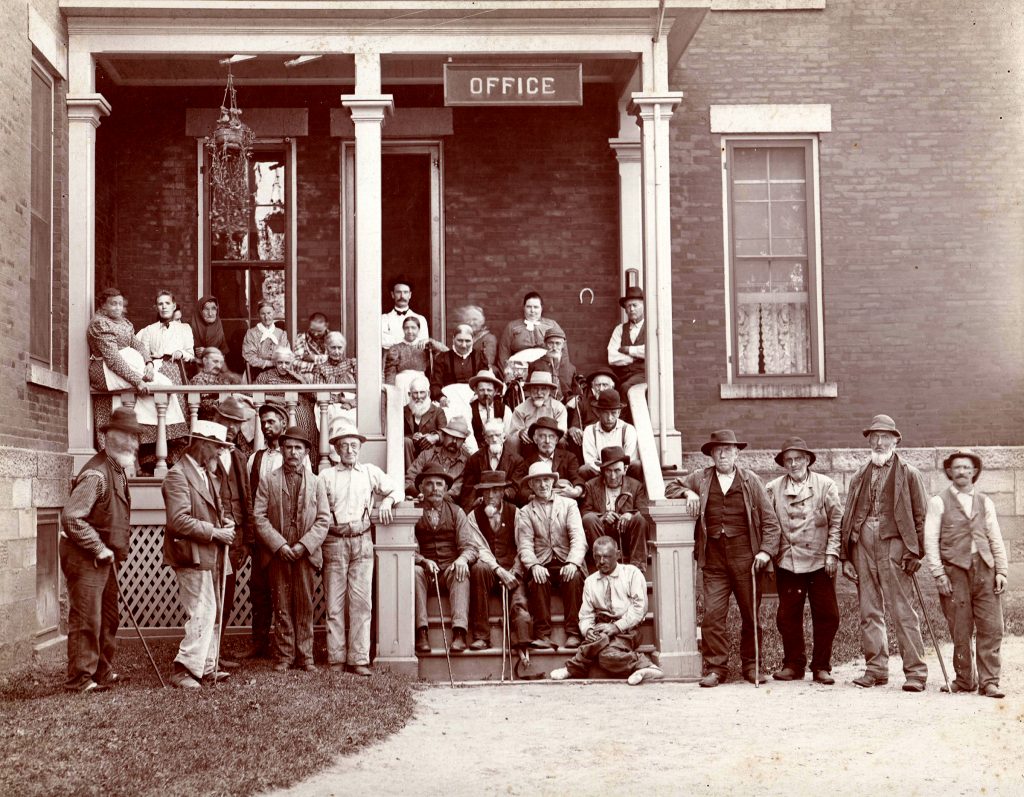 As I perused the pages of a death ledger from the Orleans County Home, covering the years 1873 to 1902, the phrase “inmate” appears quite regularly. Today we associate that term with people who are involuntarily held at a jail, prison, or psychiatric facility; a rather focused description which has evolved over the last few centuries. In its earliest meaning, dating back to the 1500s, inmate was used to describe someone who shared a residence such as a visitor at a hotel, a boarding house, or a college student living on or around campus.

The Poor House was a common place for “inmates” to gather, not because they were confined to a cell as we have come to accept the word, but because they shared a common residence. In many cases, the confinement of one to a county poor house was, in fact, involuntary. A wife whose husband skipped town may not be capable of financially supporting herself or her children. An elderly man may be physically disabled with no family and no means to support himself. In other cases, individuals suffered long-term, physically or mentally debilitating conditions that made self-sufficiency nearly impossible.

The records of the County Poor House are filled with antiquated terminology that is reflective of the infancy of medicine and of the mentalities of the past. Phrases such as “idiot,” “lunatic,” and “dumb” were commonplace. As an example, the phrase dumb was a derivative of “dum” in Dutch or “dumm” in German meaning “stupid,” as if a person’s ability or inability to speak was based solely on mental capacity. Although offensive by today’s standards, they provide a window into how medical conditions were approached over 100 years ago. By understanding the context in which the phrases were used, we can learn far more about the past than using a current lens.

In 1880, the federal government instituted the “Defective, Dependent, and Delinquent” schedules for the U.S. Census. Surfacing in the earlier years of “new immigration,” the government sought new ways to restrict immigration, focusing on physical disability as a common factor for evaluation. The schedule sought to pinpoint those who were blind, deaf, dumb, “idiotic,” insane, “maimed, crippled, or bedridden,” and those in prison, in orphanages, or in poor houses. Perhaps one of the more iconic cartoons appearing in Harper’s Weekly in the early 1880s was that of the “Poor House from Galway,” depicting a ship with Irish passengers aboard; those destined to become charges of the public and residents of the local poor houses.

Although a great deal could be written about the Orleans County Poor House and the development of the physical institution locally, more should be said about the lives of those forced to live the remainder of their lives at the institution due situations beyond their control. The County Home, as it was often called, was supplemented financially by the 155-acre farm that raised livestock and grew crops. Those who passed away while living in the home were occasionally interred at local cemeteries by family and loved ones. Others, who had no financial means or families to support such a burial, were laid to rest under sandstone markers with numbers in the County Home burial ground now located off of West County House Road.

In paging through the ledger of deaths, I thought it might be worthwhile to share a few bits of information on local inmates and residents who appeared both in the ledger and in the 1880 schedule with the U.S. Census:

Lorenzo A. Smith of Medina suffered from deafness as the result of exposure during the Civil War. He was treated at Fort Monroe for approximately four months before he was discharged.

Rebecca Sherwood of Ridgeway developed melancholia and was kept under lock and key for her own safety. Today we might recognize the condition as depression.

Jeanette Clark of Gaines developed dementia at the age of 32 and suffered with the illness for 26 years when the 1880 census was taken.

Solomon Pierson of Albion was listed as an “idiot” from birth. The census schedule noted that he had a “large skull” and was an inmate of the County Home. It was known locally that Pierson had a penchant for demolishing buildings and in a “fit of mania” in 1906; he escaped from the County Home and proceeded to tear apart an old barn. He continued this work until the walls gave way, collapsing on top of him and killing him instantly; he was a step-brother of Alice Wilson who was murdered by her husband in 1887.

Of those names that appear in the pages of the ledger, their entries are preceded by a number indicating the headstone marking their grave. One entry is simply marked “No. 18 is Unknown.”