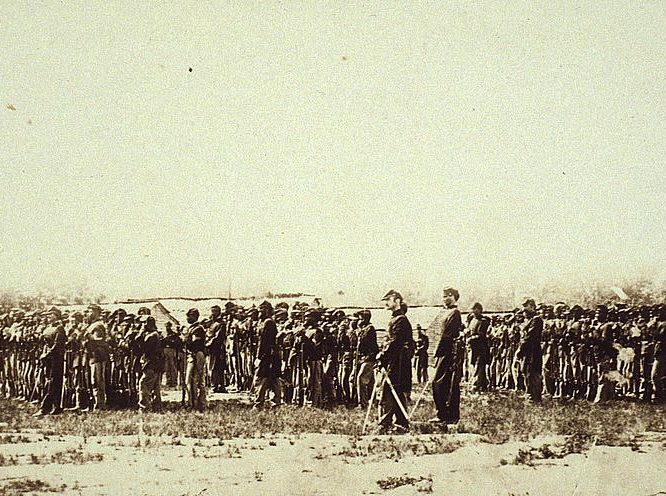 The recent vote by the Hoag Library Board of Trustees to sell the 26th U.S. Colored Troops “National Color” in March has raised questions about local connections to that particular unit and other Colored Infantry regiments. U.S.C.T. regiments, established under the direction of the Bureau for Colored Troops, appointed white officers to lead black soldiers. According to a dissertation entitled “The Selection and Preparation of White Officers for the Command of Black Troops in the American Civil War,” by Paul Renard, the government utilized various methods of electing officers to lead U.S.C.T. regiments. Early U.S.C.T. regiment officers were selected by a board of divisional officers while others were selected in a process similar to white regiments. Renard argues that the selection of officers through an examination board overseen by the Bureau for Colored Troops was the most effective method used.

Racism permeated throughout the Union Army, which refused equal pay to black soldiers and relegated segregated units to manual labor behind the front lines. Early efforts to allow freedmen and escaped slaves to enlist in the ranks of the Union Army were met with harsh opposition by political forces. Despite this, primary source evidence suggests that a large number of the commissioned officers appointed to lead these regiments held a degree of racial liberalism that was not seen in white regiments. Many white officers were abolitionists who believed in freedom and equal rights for the men they commanded. They viewed military service as a means for black soldiers to rise against their former masters; men who truly had something to fight for.

However, it is impossible to create a generalization considering that military life for men in segregated regiments was reminiscent of slavery; relegated to manual labor, and still under the command of a white master. Men within these regiments had no hope of working their way up the ranks, would never lead their own regiments, and yet their lives were at far greater risk than white enlisted soldiers. Still, it is worth calling attention to the complex relationship between white officers and the black soldiers they led. Perusing the pages of the local town clerks’ registers of Union soldiers, at least eight local men received commissions to lead black regiments; two of those men received commissions with the 26th U.S.C.T.

Charles Henry Mattison was born March 27, 1837, at Barre to Alvah Mattison and Orpha Bull. Raised on the farm in his hometown, Mattison enlisted with Company D of the 151st New York Infantry on September 9, 1861, and was promoted to the rank of sergeant. He received a commission as a second lieutenant with the regiment but turned it down, later receiving a commission with the 26th U.S.C.T. at the same rank. He reported for duty on January 14, 1864, and was later promoted to first lieutenant and adjutant. He was with his regiment during a skirmish at St. John’s Island on January 5, 1864, and the Battle of Bloody Bridge on July 7th when 1,000 soldiers of the 26th U.S.C.T. fought an inconsequential battle; 2,000 Confederate soldiers fended off a Union force of 8,000 men. After the war, Mattison returned to Barre Center where he purchased a wagon and blacksmith shop. Three years later he purchased the farm of his father-in-law, Hiram Fargo. He was elected as the Barre Town Clerk after the war and was responsible for recording the names of those fellow soldiers who served in defense of the Union cause. He was elected Barre Town Supervisor and later to the NYS Assembly in 1878, serving in that position for one year. Upon his death on March 23, 1883, the Grand Army of the Republic Post in Albion held a large memorial service and for years after his death, the local post would memorialize the anniversary of his passing.

Harmon Leroy Salisbury was born around 1838 at Clarendon to George Salisbury and Amanda Annis. He enlisted with Company G of the 151st New York Infantry on August 26, 1862, at Clarendon. He remained with the regiment for just over one year, receiving a promotion to the rank of sergeant before his discharge on January 28, 1864, by reason of promotion to captain with the 26th U.S.C.T. Like Mattison, Salisbury was with the regiment at St. John’s Island and Bloody Bridge in July of 1864. After the war, Salisbury moved to Vienna, Virginia, where he purchased a large parcel of land. Valued at $16,500 in 1870, he split his land into lots and sold parcels to freedmen on easy credit and generous mortgages. He provided black workers with a fair living wage and donated a parcel of land for used as a cemetery by the black community in that area. He died in 1913 and was buried at Merrifield Cemetery in Merrifield, VA.

Marion Patterson, born May 11, 1840, at Clarendon to Calvin Patterson and Julia Ann Matson, enlisted as a private with the 13th New York Infantry at Rochester on April 30, 1861; he was discharged as a “minor” on September 7, 1861. He returned home to teach school for a year and enlisted with the 11th New York Heavy Artillery on his birthday in 1863. Unable to fill the full regimental quota, the unit was merged with the 4th New York Heavy Artillery and Patterson was promoted to the rank of sergeant. On December 9, 1863, he received an appointment as first lieutenant with the 22nd U.S.C.T. and later was appointed to fill a vacancy as captain with the 19th U.S.C.T. According to one account, his promotion to captain came as the result of his daring rescue of the regimental colors during the Second Battle of Fair Oaks in October of 1864. At the end of the war, Patterson was placed on general court-martial as a Judge Advocate, a position he held for some time. At the conclusion of his service, he returned to Western New York where he married his wife, Eliza Van Wagoner, at Lockport before relocating to Kansas in 1871. He worked a large farm there, raising livestock, and was elected to the Kansas State Legislature in 1891.

Wallace Myron Sterling, born June 26, 1840, at Gaines to Alphonso Sterling and Mary Horton, answered the call to service on May 11, 1861. He was mustered into service on May 22, 1861, with Company D of the 28th New York Infantry. On May 25, 1862, he was captured at the Battle of Winchester and paroled three days later. After his release, he was sent home on furlough for an undisclosed amount of time. According to a published account of the Sterling family genealogy, Wallace had placed his unloaded musket behind a door in the house. His older brother loaded the gun and ventured out on a woodchuck hunt in the afternoon. Upon his return and being unsuccessful in his adventure, the brother placed the gun in its place behind the door. Later that evening, Mary Jane, a 19-year-old sister, asked Wallace to demonstrate the manual of arms. He mimicked the loading of the rifle, aimed, and she gave the command to “fire!” He pulled the trigger, discharging the musket ball into her head. The accidental death of his sister plagued him with sadness for the rest of his life.

After his discharge from the 28th New York Infantry, he reenlisted with Company B of the 9th New York Heavy Artillery in July of 1863. The following month he was presented a commission as second lieutenant with the 1st U.S.C.T. from President Lincoln, an opportunity he accepted nine days later. In July of 1864, Sterling submitted his resignation with supporting documentation from an examining surgeon. Dr. Willoughby wrote, “…he is suffering from great mental depression, caused by his having, by accident, caused the death of a sister, more than a year ago, since which time he has had fits of mental disturbance, being at times partially insane.” The surgeon believed that the condition would become permanent should he remain in the service. After the war, he relocated to Elysian, Minnesota where he served as the local postmaster and justice of the peace.

Sidney Abert Vaughn, born c. 1841 to Artemus and Eleanor Vaughn at Hartland, NY, resident of Shelby. Commissioned as a first lieutenant with Company G of the 12th U.S. Colored Heavy Artillery at Lexington, KY on July 23, 1864; mustered into service on August 23, 1864. The 12th U.S.C.H.A. was placed on garrison duty at Bowling Green, Camp Nelson, and other locations in Kentucky.

Frank B. Kent, born December 12, 1838, in Ohio to John P. and Maria Dean Kent. Enrolled July 11, 1861, at Medina as first sergeant, Company F, of the 3rd New York Cavalry. Discharged and commissioned as a lieutenant with 2nd U.S. Colored Cavalry; promoted to rank of major on September 1, 1865. Wounded in the left leg, presumably on June 15, 1864, during the Second Battle of Petersburg.