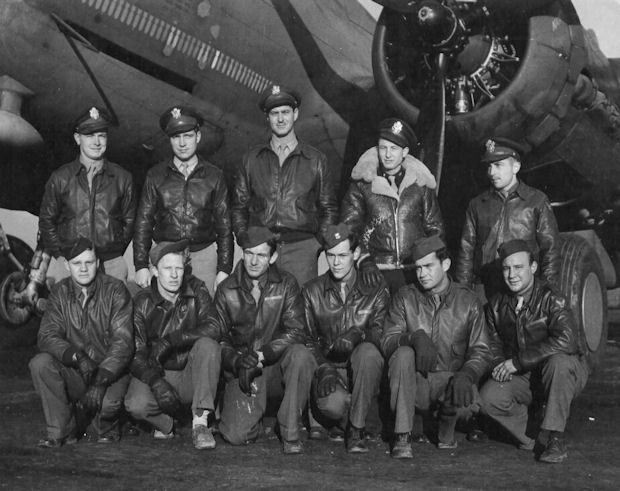 Until David Bellavia received his Medal of Honor on June 25, 2019, John Butts was the most recent recipient of the prestigious honor. However, Forrest Lee Vosler was the last Orleans County native to receive the medal while still living. Born on July 29, 1923 at Lyndonville, New York to William and Lottie Vosler, Forrest graduated from Livonia High School and enlisted in the U.S. Army at Rochester on October 8, 1942. Following basic training at Atlantic City, he received training as a radio operator at Scott Field, Illinois and later completed gunnery training at Harlingen, Texas. He received a promotion to the rank of Sergeant in May of 1943 and was again promoted to the rank of Staff Sergeant in October of 1943 as his unit prepared for deployment overseas.

Vosler was assigned as a radio operator and aerial gunner aboard a B-17 Flying Fortress nicknamed the “Jersey Bounce Jr.” with the 358th Bombardment Squadron, 303rd Bombardment Group stationed out of England. On December 20, 1943, the Jersey Bounce Jr. departed RAF Molesworth as part of its 28th combat mission; the flight was Vosler’s fourth combat mission. Capt. Merle Hungerford of El Paso, Texas was at the controls and Carlton native George Buske manned the tailgun as nearly 500 bombers departed England for Bremen, Germany.

Dr. Ivan Brown, a physician who treated wounded aviators with the 8th Air Force, authored an account of the Jersey Bounce Jr.’s December 20th combat mission. “At 26,000 feet, the assigned bombing altitude, the air temperature was below -50 F. Heavy condensation trails left by the bomber engines spread like white clouds in which large numbers of German fighter planes could hide to launch their attacks unseen.” The flyers were unprepared for the heavy anti-aircraft fire that targeted their planes with deadly precision.

Brown continued, “Suddenly, an anti-aircraft shell burst knocked out the Jersey Bounce’s No. 1 engine. Moments later, just after the bombardier called out “bombs away,” another shell knocked out the No. 4 engine, leaving its propeller, which could not be feathered, windmilling out of control.” The plane quickly fell out of formation as it lost altitude with only two engines intact. The nose, waist, and tailgunners maintained defensive fire against the onslaught of enemy fighters, which riddled the fuselage with machine gun bullets and exploding 20-mm shells. One of these exploding shells struck Vosler in the legs and feet while Buske suffered a bullet wound to the abdomen before an exploding shell struck him in the chest.

Propelled backward, Buske was knocked unconscious as Vosler quickly maneuvered himself into the tailgun. Another 20-mm shell hit the aircraft, sending shrapnel into Vosler’s chest, face, and eyes. He continued to deliver defensive fire upon German aircraft until the attacks subsided. Nearly out of fuel and losing altitude quickly, the crew jettisoned every piece of equipment to lighten the plane. Vosler, severely wounded and floating in and out of consciousness, begged the crew to throw him out of the plane to reduce weight. As the aircraft plunged into the frigid waters of the North Sea, Vosler crawled out of the aircraft onto a wing as other crewmembers pulled Buske out of the craft. Realizing that the unconscious Buske would slip into the cold water, Vosler grabbed him by the waist and held him in place until inflatable dinghies were ready for use.

A passing Norwegian trawler quickly picked up the crew and transferred them to a British rescue vessel. Brown wrote, “Vosler was sent to a Northampton Hospital and later to the States for a long hospitalization. One of his eyes had to be removed, and the other required extensive surgery but partial sight was restored.” As for Buske, “There was a large…wound of his right anterior chest, which exposed his right lung and continue through a disrupted diaphragm as a single gaping wound into the right upper abdomen.” He suffered a fractured liver, shell fragments scattered throughout his chest, abdomen, and legs, and bullets lodged in his back. In 1952, Buske had a surgical procedure to remove shell fragments from his abdomen and a coronary bypass procedure in 1988, which included the removal of a shell fragment found near his heart.

Vosler received the Medal of Honor from President Franklin Roosevelt on September 6, 1944, “For conspicuous gallantry in action against the enemy above and beyond the call of duty while serving as a radio operator-air gunner on a heavy bombardment aircraft in a mission over Bremen, Germany, on 20 December 1943. The extraordinary courage, coolness, and skill he displayed in the face of great odds, when handicapped by injuries that would have incapacitated the average crewmember, were outstanding.” After the war, Vosler enrolled at Syracuse University where he struggled to earn a degree. Unable to complete his studies due to the eye injuries he sustained during the war, he was posthumously awarded a Liberal Arts degree from Syracuse as part of the Class of 2015. He died in Florida on February 17, 1992, and is buried in Section 60, Grave 4924 at Arlington National Cemetery.