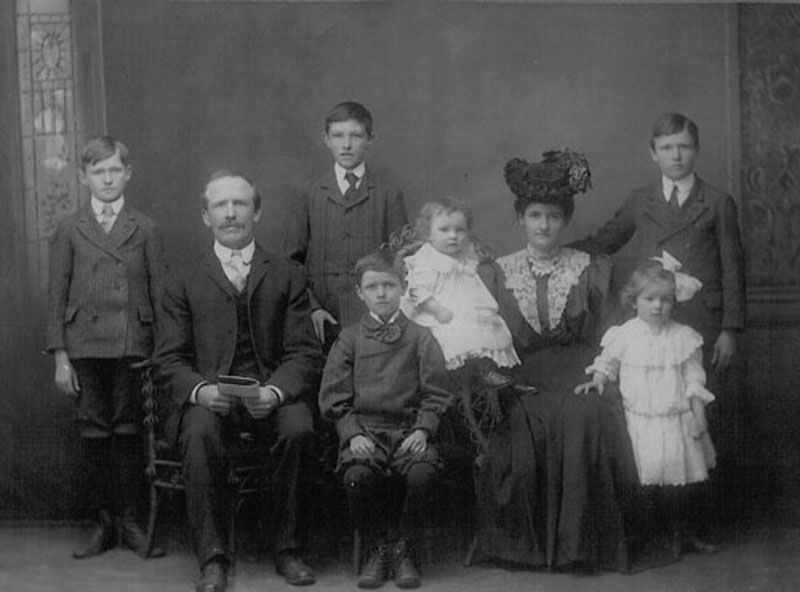 ALBION – Pictured here is the family of John Galashan Sheret, Sr. of Albion. An immigrant from Newhills, Scotland, John came to Albion where he was employed as a block breaker. He later served as Secretary of the International Union of Paving Cutters of the United States and Canada.

Pictured in this photo (standing left to right) are John Jr., James, and Egbert. Seated, left to right: John Sr., Andrew, Marian, Anna, and Elsie. The photograph was taken circa 1906.

Egbert served with the Machine Gun Battalions, known as “Suicide Squads” during the Punitive Expedition in Mexico. Immediately following his return to New York City in 1917, he requested a transfer to the 3rd NY National Guard, Company F in Medina to serve with his brothers James and Andrew.

On Sept. 29, 1918, the 27th Division of the American Expeditionary Forces, containing the 108th Infantry and Company F, led a courageous charge on German defenses at the Hindenburg Line. Both Sgt. James Sheret and Pvt. Egbert Sheret were killed on that day. Andrew, the company’s bugler, was severely wounded during the engagement.

Sgt. Sheret was awarded the Distinguished Service Cross for his bravery and his hometown paid tribute to him in naming the Albion Legion Post in his honor. Sheret Post #35 is regarded as one of the oldest American Legion Posts in Western New York, founded under the direction of Judge Bernard Ryan.

It should be noted that the 108th Infantry and the men of Company F, Orleans County’s own, were the only men to break the Hindenburg Line that fateful day.