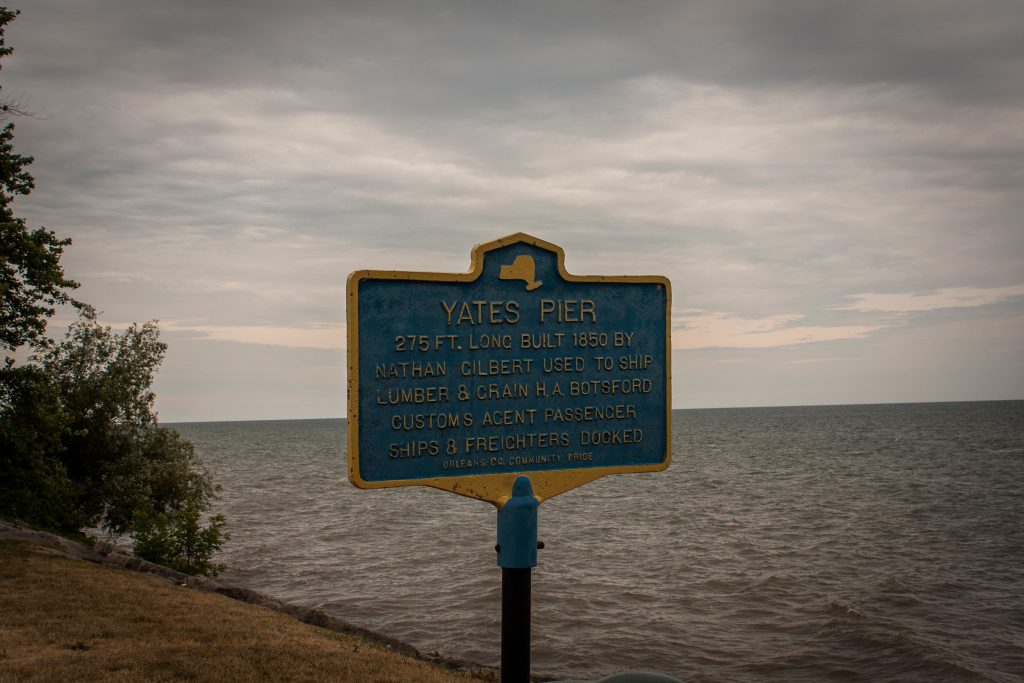 Another year has passed, and I often wonder if I will have enough “new” material to write 52 articles. Reflecting on the number of requests for information that flow through my office on a weekly basis, I started thinking about the number of questions I have received about the various New York State historic markers. Although the State no longer funds the purchase, installation, or upkeep of these important monuments, those installed since the program started in 1926 showcase locations that are significant to the development of our communities. Perhaps utilizing some space in this column will help add to the information cast upon these blue and gold signs.

In 1989, an Urban Development Corporation grant was used to install fifteen historic markers in towns and villages throughout Orleans County. The project was initiated through the Orleans County Tourism Board and is noted on each marker as “Orleans County Community Pride” (Bill Lattin wrote about this project in his column Bethinking of Old Orleans vol. 11, no. 39). Each marker was cast from heavy aluminum by the Walton-East Branch Foundry in Walton, NY and installed by the respective highway departments for each municipality. These markers now cost around $1,300, but were less than half of that total when this project was undertaken.

These signs, such as the one installed at Shadigee to mark the location of Yates Pier, serve a valuable purpose in pinpointing significant historical sites that no longer exist. As the marker reads, a 275-foot-long pier was built in 1850 by Nathan Gilbert to ship lumber and grain by way of Lake Ontario. H. A. Botsford served as a customs agent at the location which also served as a docking area for passenger ships and freighters.

Situated approximately one mile north of Yates Center, a business venture was started by area farmers who hoped to create a pier from which to ship wheat and other grains to Canada and eastern New York. George Lane, a prominent farmer from Newfane, held the majority stock in the company and the 26-year-old Nathan Gilbert of Yates was selected to construct the pier. In 1852, Jonathan Edgecomb of the Orleans County Committee on Farms indicated in a report to the New York State Assembly that Berrick Gilbert, father of Nathan, operated a large farm near the lake in Yates which occupied some of the finest land in the county. A warehouse was constructed near the pier upon the old Chamberlain & Simpson warehouse site, which was swept into the lake several years prior.

Lane relocated from Newfane to Lockport in 1856 where he opened a nursery business selling fruit and ornamental trees. Erastus M. Spaulding took over the shipping business until he entered the Army during the Civil War, to which his brother Henry and another man, O. D. Phelps, took over the business. In 1873, Richard Barry opened a lumber yard near the pier dealing in pine and cedar shingles, yellow cedar posts, fence boards, and lath, as well as plaster water lime and cement, which he “kept constantly on hand and sold cheap for cash.”

Yates Historian Virgina Cooper noted that the site was prominent among fishermen as well, including Harvey Moon and George G. Thayer who were mentioned specifically in the 1870s. Yet just like Oak Orchard Harbor, this site became a destination for pleasure seekers, many whom opted to stay at the Ontario House operated by Silas Hopkins (the site now occupied by the water treatment plant). Upon the hotel’s reopening in 1876 after renovations, the building offered a large dining room, a 20×60 foot hall for dancing, two croquet courts, boats “with experienced men to attend them,” large swings, and bathing houses; it was destroyed by a fire in 1925.

Of course, the site was not without its fair share of misfortunes. In October of 1873, the Young America, a propeller vessel departing from Oswego and bound for Cleveland, broke down at 4pm on October 22nd two miles above the pier. Eventually the vessel drifted towards shore and ran aground, taking on water. A tug boat was dispatched to retrieve the vessel soon after. Five years later on August 24, 1878, eighty people from Shelby, Ridgeway, and Medina boarded the tug J.J. Morely from the pier for an excursion trip to Port Hope, west of Coburg, Ontario. The vessel departed at 8:30am and did not arrive until 3pm. The rough seas caused quite the commotion, “badly stirring up” the passengers, “particularly the Misses.” In the hopes of avoiding the turbulent waters, the passengers stayed overnight, but the return voyage was considered far worse than the prior trip!

When Isaac Signor published Landmarks of Orleans County, New York in 1894, he noted that there were no remnants or any indication that a pier ever existed at the site. In 1981, County Legislator Frank Berger pushed the issue of constructing a fishing pier on the site.