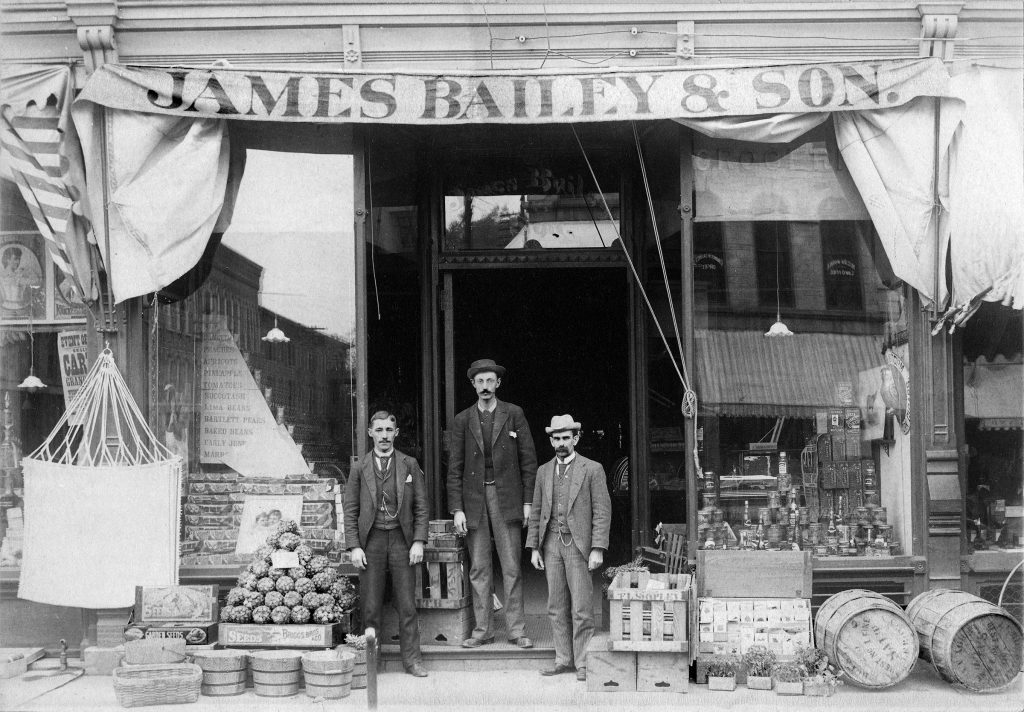 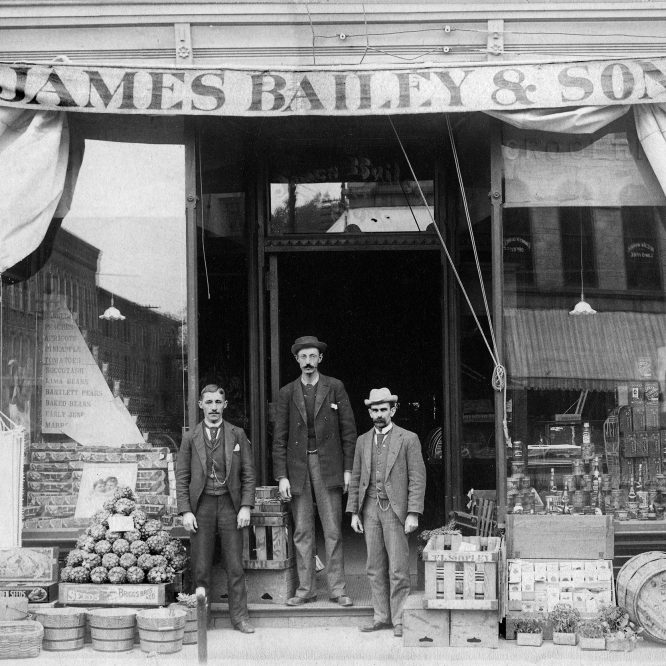 In the years preceding massive department and grocery stores, smaller family owned dry goods and grocery stores occupied the storefronts of small-town America. This image shows the store owned by James Bailey of Albion, taken sometime in the late 1890s.

Bailey was raised on a 240 acre farm on the Transit Road and sometime in the 1850s entered the employ of Harvey Goodrich, a grocer and dry goods dealer at Albion. After a short stint with that interest, James entered the produce business with Charles Baker and worked under his employ for nearly 15 years before starting his own grocery store. During his time with Baker, Bailey developed a sizable farm west of Albion, later owned by John H. Denio on land now occupied by the Albion Correctional Facility.

Herbert J. Bailey, pictured center, was brought into the trade in 1882 when the business became known as James Bailey & Son. The father-son duo also built a large fruit house capable of holding 8,000 barrels near the railroad freight house on West Academy Street, one of the first in the area.

This store was located at 61 Main Street in the Swan Block on the corner of North Main and West Bank streets, now occupied by Five Star Bank. The reflection in the right window shows the Empire Block; one can faintly make out “Law Office” in the upper windows where Church & Currie and Kirby & Hughes had their offices. In the left window is a reflection down East Bank Street where one can slightly see the portico of the Orleans House, now a municipal parking lot across the street from the Village of Albion offices.

Standing to the left of Bailey is George Hess who worked as a clerk in the store. Hess started with Bailey after 1892, so we know this photograph was taken sometime between then and prior to the death of James Bailey in 1899, when Herbert took full ownership of the business and changed the name from James Bailey & Son.

The storefront is filled with merchandise commonly carried by local grocers. A hammock hangs on a hook on the left, situated next to a large pile of pineapples. For those who preferred to grow their own produce, seeds of all kinds were offered. The display inside consisted of canned fruits and vegetables, including peaches, apricots, pineapple, tomatoes, succotash, lima beans, Bartlett pears, and baked beans.

Two massive barrels of salt sit to the right, shipped in from LeRoy and the right window includes a nice display of canned and bottled goods as well as a tall stack of Quaker Oats. The store located to the left was owned by Dr. Charles Burrows, who operated a drug store once owned by George Barrell, and the boot and shoe store to the right, owned and operated by Orville Taylor.

Herbert was a respected businessman and a Republican in politics. He was elected Village President in 1903, the first Republican elected to that position. In 1882 he married Mary Sawyer, the daughter of Hon. John G. Sawyer, a member of the U.S. House of Representatives.