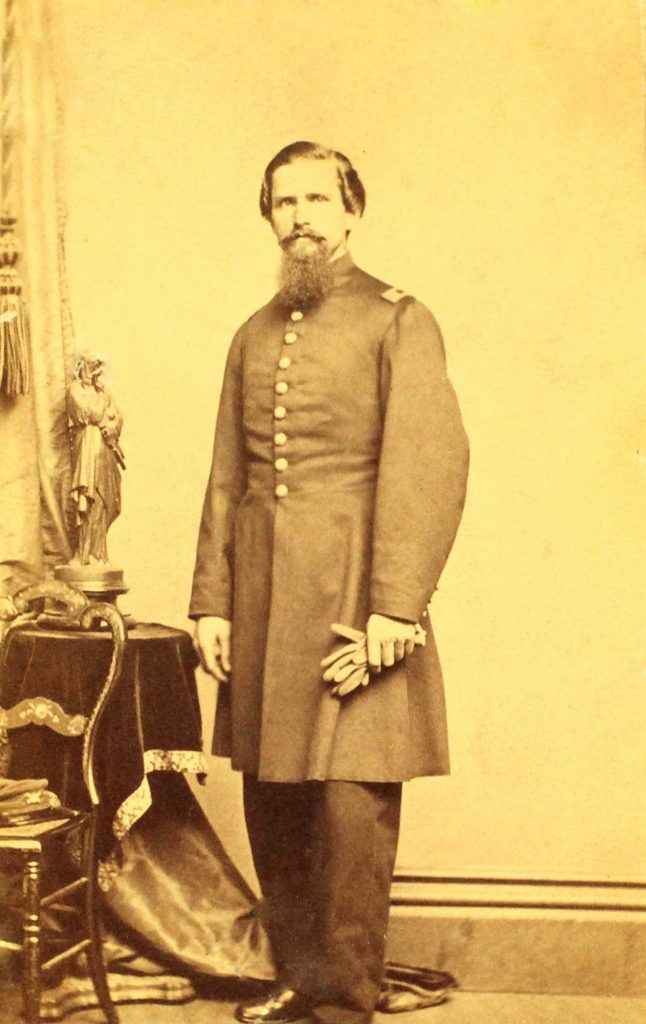 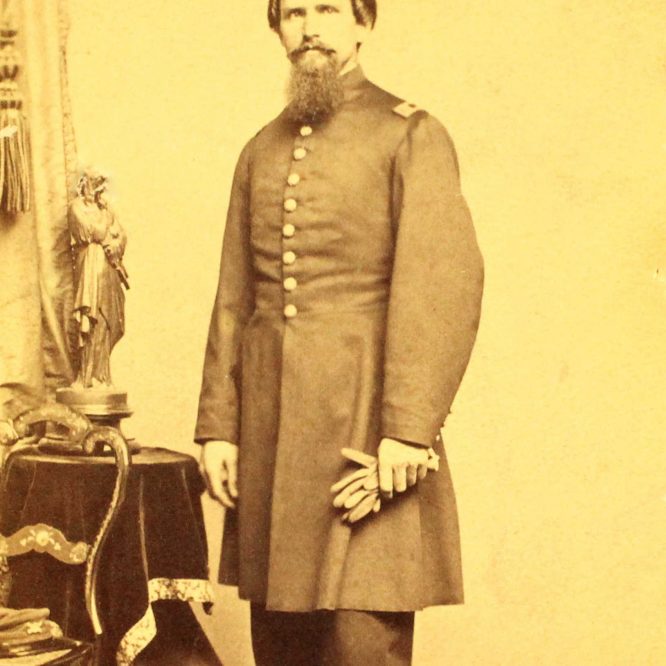 This studio photograph, taken circa 1863, shows Capt. George A. Hoyt wearing a Union frock coat and holding a pair of gloves. Placed on the chair to the left is a kepi with crossed artillery pieces, signifying his service with the 8th New York Heavy Artillery. Born in 1830/1 at Dansville, New York, Hoyt came to Gaines in 1855, marrying Julia McOmber and quickly becoming a well-respected harness maker. In August of 1862, he received a commission as a lieutenant with the 129th New York Infantry which was later converted into an artillery regiment.

Sgt. Thomas Jasper Dean of Company I wrote home to his mother at Byron on June 23, 1864, following the regiment’s engagement with Confederate troops in advance of Petersburg:

“Directly South of Petersburg about 4 miles behind breastworks we took last night ben skirmish fighting all day. Dear Mother & All Friends whom this may interest…Our company lost in Wounded yesterday but 7 perhaps more but think not. They have not all come in yet. We cant tell precisely. the Rebels are charging there position in front of us. they appear to be massing there troops for a charge on our works. Col Bates was wounded last night besides quite a number of other officers killed and wounded…I led the company into the charge last night. Our men has been marched much there spirits are verry low…” (sic)

“Since I wrote you last the regt has been in another of those terrible charges. We did not lose many men but we lost one of the bravest that ever drew a sword & that was Lieut. Col. Bates. He fell while leading the men within four rods of the enemies breastworks shot through the bowels…There was no officer left to command our company the Capt being in command of the second Batallion & all the sergeants being absent or wounded…” (sic)

According to Maj. Erastus Spaulding, after the charge described by Dean and Sherman, the unit held their position within several yards of the enemy position and “entrenched in the night under severe picket-fire.” The following morning, the enemy had abandoned the position thus allowing the 8th N.Y.H.A. to occupy the works until that evening when the unit “withdrew a distance of a mile…”

At some point during the advance on June 22, 1864, Capt. George Hoyt suffered a gun shot wound. Some records indicate a wound to one of his legs while others indicate a wound to his ankle. He was tended to by the regimental surgeon and sent home to recuperate. During his furlough, Dr. William McKennan of Albion tended to Hoyt until his untimely death on July 5, 1864. According to McKennan, Hoyt suffered “traumatic tetanus induced by [a] gun shot wound of the leg,” his death was caused by lockjaw.

A widow’s pension application filed by Julia Hoyt, a 32-year-old mother of three, illustrates the hardships suffered by so many women as a result of the ravages of war. Her oldest daughter, Marilla, had just celebrated her sixth birthday before her father was sent home to recover. The youngest daughter, Octavia Artilla, was just shy of 18 months.

Julia Hoyt never remarried, her financial support derived solely from her widow’s pension which she carried up until her death on February 2, 1917. Among the affidavits and other documents is a letter penned by Octavia Hoyt Mather, her mother’s “only living heir,” requesting money to pay for her mother’s burial; $12.00 to pay for Dr. William Burbank’s bill, $102.00 for an undertaker, and $6.00 to Mt. Albion for burial.

In the years after the war, Octavia Mather attended regimental reunions in place of her father. George Hoyt had already left for war when she was born and according to several accounts, she became “the daughter of the regiment.” It was said that when Hoyt received word of his child’s arrival, he asked Col. Peter Porter “what shall I name my baby daughter?” Porter responded, “Why name her after our regiment, Octavia Artilli 8th heavy artillery.”

The Hoag Library and Orleans County Historical Association are co-sponsoring a Civil War Series in April, featuring a program entitled “When Did the Civil War End?” with Dr. John Daly of SUNY College at Brockport on April 16th at 12:00pm. I will present a program entitled “The Legacy of Rufus Bullock: Racial Liberalism and Reconstruction” on April 30th at 6:00pm. A number of other programs will take place throughout the month!