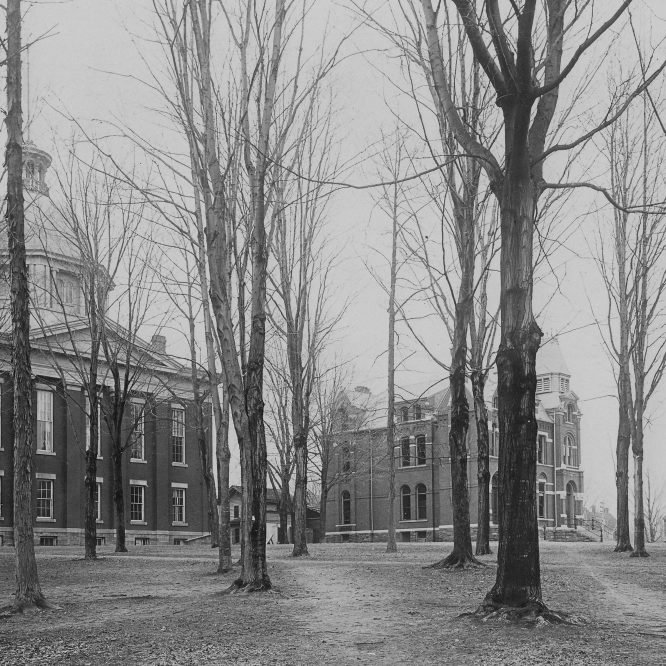 This photograph, taken after 1903, shows Orleans County Courthouse and Clerk’s Office located in Albion. Readers will notice a diagonal sidewalk running from the front steps of the courthouse to East State Street and a number of beaten footpaths through the front lawn. The photograph is dated post-1903 because the sandstone jailhouse is visible to the left of the courthouse. Also visible in the photograph is a tall flagpole extending from the cupola atop the dome.

According to Isaac Signor, the building was constructed at a cost of $20,000 under the supervision of Lyman Bates, Charles Baker, and Henry A. King. The county contracted William V. N. Barlow of Albion to design the courthouse. Born in Madison County in 1810, Barlow moved to Albion in 1833 and launched his career with the development of Albion’s most significant buildings. The presence of the cupola on the courthouse was a signature of Barlow’s designs, which earned him the nickname “High-Rickety” Barlow.

“Notable exterior features include a magnificent octagon dome and cupola. The dome being composed of 88 individual rafters. The columns of the Ionic order display hand carved and sawed capitols. The front entrance remains as a superb example of Greek Revival detailing. A beholder can easily be awe inspired by the beautiful proportions, symmetry, dignity and symbolism that pervades and pulsated from this masterpiece. It measures 50’ x 55’ and has a balcony in the read. The judge’s bench, clerk’s desk, dividing balustrades and rising seats are all original. Corinthian pilasters supporting a full Greek entablature are plaster, above which is a bi-level ceiling with more plaster moldings and ornamentation coming to a climax with a decorative ventilator. From this is suspended a single electrolier created in 1928 to blend with all the architectural details.”

The most iconic feature of this landmark building is its beautiful silver dome. Yet most residents would be surprised to read that this color scheme is not native to the structure. According to a newspaper article published July 22, 1929, the Board of Supervisors hired John “Jack” Finn of Albion, a local steeplejack, to complete work on the dome. The article noted that Finn applied a coat of blue lead (to seal the metal) followed by a coat of yellow paint. Once the yellow was sufficiently cured, Finn applied a layer of gold enamel paint. According to early descriptions, the dome was “gilded,” or covered with a thin coating of gold paint or gold leaf. According to Cary Lattin, the dome remained this color until 1948, when the dome was repainted with the signature silver color.