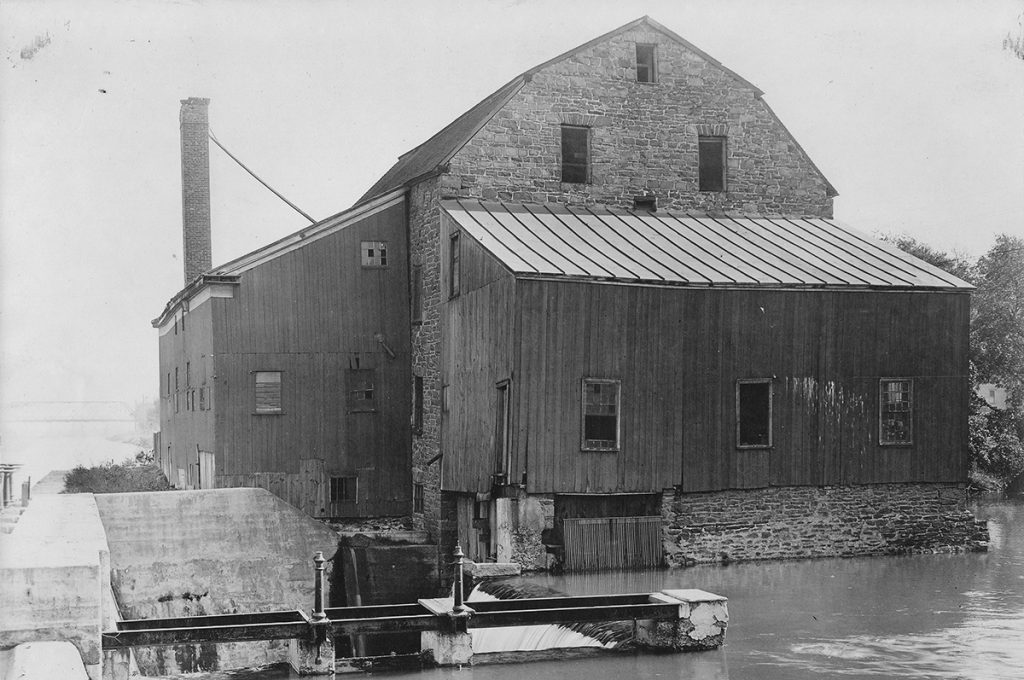 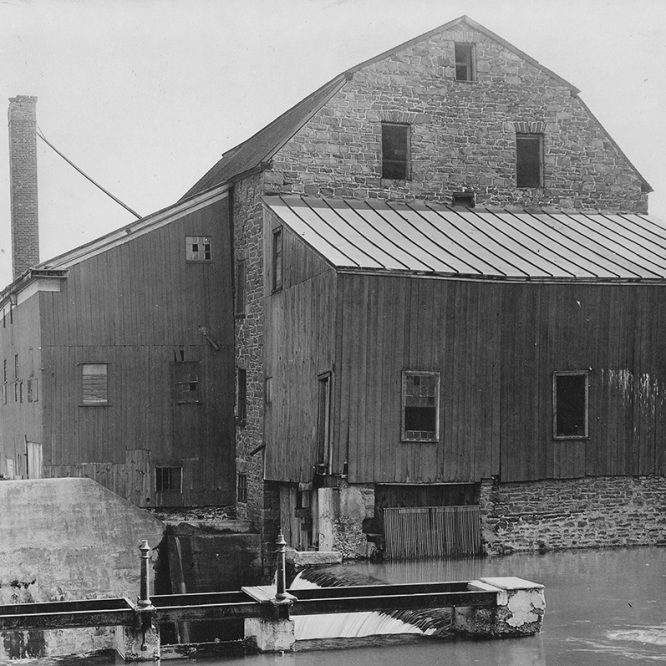 This image, taken in the early 1920s, shows the Woods & Sprague Mill located on East State Street in Albion. The mill relied largely on water from the West Branch of Sandy Creek, which passes under the Erie Canal at this location. Looking east, the Brown Street Canal Bridge is visible in the distance and the image is part of a series that shows leakage from the Canal into the foundation of the mill.

The history of this mill dates back 1819 when William Bradner purchased 266.5 acres of land from the Holland Land Company for the sum of $1,159.00. According to Arad Thomas, Bradner relocated from Palmyra and purchased several lots of land including Lot 35 from William McAllister. Aside from the construction of an early sawmill, Bradner’s grist mill included mill stones which he personally cut by hand in Palmyra.

Grist mills provided an essential service to local farmers, particularly in the years preceding the construction of the Erie Canal. According to Gaines pioneer John Proctor, the closest grist mill to his property was Black Creek, nearly twenty-five miles away. However, the path to that mill was so difficult to traverse that the thirty-mile trek to Rochester was much faster. Arad Thomas noted in the Pioneer History of Orleans County that “the people of Kendall took their grain to Rochester, or to Farwell’s mill in Clarendon, to be ground. Farwell’s mill was much nearest, but the road to it was almost impassable with a load, and the little mill had not capacity to do all the work in that part of the country.” In response, residents constructed grist mills within their community; Ose Webster constructed a mill at Kendall Mills around 1819 which resolved the travel constraints highlighted by Thomas.

In colonial New England, the grist mill provided its owner with a symbol of status in the community. Millwrights possessed skills that bridged across the talents of carpenters, smiths, and masons, making their work far more valuable and desirable than blacksmiths. As bread represented a dietary staple, millwrights and millers were often viewed as life-givers in their communities. The same held true for early mill owners in Orleans County. Needing flour to sustain their families, local grist mills provided farmers with the ability to grind wheat into flour and corn into meal. With little means of transporting surplus crops to market, many mills operated in conjunction with distilleries until the Erie Canal opened in 1825.

A land deed from 1834 shows a transfer of ownership from Freeman Clarke to Joshua Rathbun for the sum of $10,000 – quite the increase in value from Bradner’s 1819 purchase price. Rathbun would eventually share “mill privilege” with Roswell Clark in an 1844 deed transfer for the sum of $10.00 at which point the records reference Bradner’s “old grist mill.” That same year, the property was sold at public auction to Alexis Ward for the sum of $2,000. An 1849 advertisement in the Rochester Daily Democrat advertised the sale of the building, noting the mill was “propelled by water and steam, or either…it has four runs of 4.5 ft stone. Custom and Merchant Bolts mostly new and everything in good running order. A large and commodious warehouse has been recently added, and a storehouse for barrels.”

The mill lot was sold to Orson Tousley from Wilson & Ward in 1853 for $12,200 and John B. Lee was brought in as a partner in 1855 when he purchased half-interest for $6,000. Tousley & Lee sold out to Jerome Lee, John Lee’s nephew, in 1858 and the property once again sold to Hannah Smith in 1879. George Sprague purchased the lot from Smith in 1886, thus starting the line of ownership that would lead to the Woods & Sprague partnership.

Once located behind the present-day Community Action building on East State Street, an August 23, 1934 article in the Medina Tribune highlights the last legs of this historic structure. “A modern structure having supplanted it, the more than century-old Woods and Sprague grist mill in Clarendon Street between the Barge Canal and East State Street, which marks the birthplace of milling in Albion, is being torn down.”